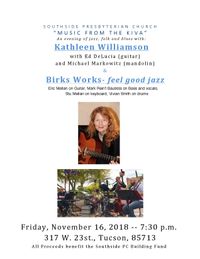 We are having our 1st annual Colby Olson Foundation DreamCatcher Festival on August 19th from 5-9pm at La Cocina. Kathleen Williamson will join our amazing lineup of artists, musicians, poets, authors, comedians, and other performers from our talented and diverse community!   We are a 501(c)(3) organization dedicated to raising money for LGBTQ+ youth and senior organizations. https://www.facebook.com/ColbyOlsenFoundation/

If you would like to learn more about our organization and why we started, check out this article in Tucson Weekly. https://www.tucsonweekly.com/tucson/tucson-salvage/Content?oid=18219018